A group of Georgia Tech PhDs from Compass Technology Group, an Atlanta-based design-and-build innovation company, recently sought out Cobb Tool for its precision machining and engineering resources. They were developing equipment using radio frequency technology to provide precise measurements of the thickness of various materials.  Since they were not machinists or mechanical engineers, they needed a local machine shop with precision machining capabilities and engineering experience.  For this level of high-quality calibration equipment delivering precise measurement data, the Compass component assemblies had to be 100% accurate. As a result of their first project, Cobb Tool has become their sole source for machined parts.  Pictured are two aluminum parts, and a very delicate piece of tooling foam with detailed machined features. 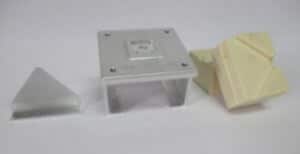 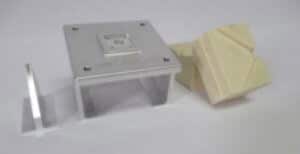 Creating Customer Loyalty
When the Chips are Down

A purchasing agent’s worst nightmare: late production parts, the potential for a line shut-down, and his vendor wasn’t answering the phone. Fortunately, he had an alternative – Cobb Tool. He was already buying some parts from Cobb Tool and believed that we could handle this new one. But this was not an easy task. The parts were not simple. From a rough casting, they required two different turning operations and two separate milling operations.

Tolerances were as tight as +/- .0004” and they needed 300 to 400 pieces per month. But Cobb Tool did what it took to get these parts into production and prevented the customer from shutting down his line. By rescheduling other jobs, reassigning and dedicating equipment, training staff on new machines, and taking on overtime, Cobb Tool met their need. And in the process, secured a loyal customer. 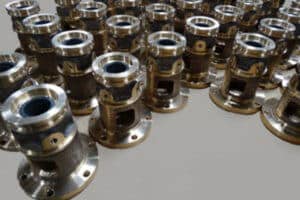 Can You Make Us One of These
Without It Costing an Arm and a Leg?

A PVC plastic part, complex profiles, pockets and slots on every surface. And they only needed one. The part was too complex to make on a manual machine. And with four different setups, it would be very expensive to make on a full CNC milling center.  With a 3D model and a good machinist, Cobb Tool made this part to spec and cost-efficiently on one of our CNC toolroom mills.